I always thank my mother for the creativity genes she shared with me. She was a stay-at-home mom and her hands were always busy crafting something… from pastries, to paper beads, to pompom poodle bottles. Today, I'll reminisce one of her favorite holiday decorations: jazzed up pinecones.

Back in those days, we would go to a Farmer's Market to buy big sacks of pinecones that were brought down from the mountains. The objective was to hang the cones on our Christmas tree, so my mom would tie each one with a ribbon. Then she would dab white glue on the tips of the cone’s flaps, sprinkle glitter on the glue, and shake off the excess glitter. Then she would add a cute bow on top and voila! Of course, by the time we were ready to hang the cones, our hands and faces would all be shimmering in green and gold glitter!

This time, it's a little different. I picked up the cones from the lawn across the pond. There's a huge pine tree out there that drops quite a bunch of rather large cones in the middle of the year. So, I've had these pinecones since April, I think.

Some of them fell with part of their stems intact, so it would be easy to tie a handle on them. Those with no stems, I drilled small holes and hot-glued twist ties to serve as their handles.

Then I used an acrylic type metallic paint to color the tips of the cone flaps "glorious gold" and "royal ruby." 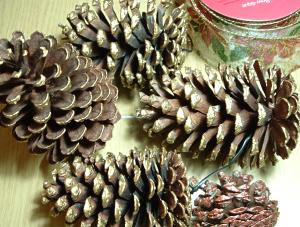 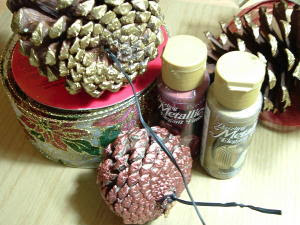 Add some ribbons, gold balls, and other accessories, and we're all set. 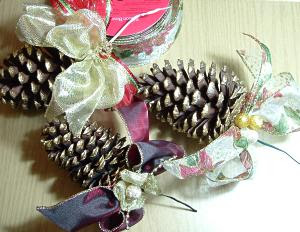 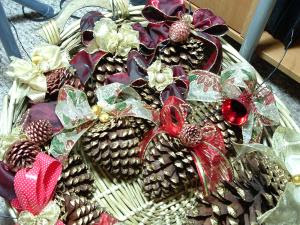 Now all we need is the tree to hang them on.
2 comments:

What Was I Thinking: The Bagel Incident

I have a long list of excuses: "Senior moment" (most valid, of course), "I was distracted" (it's my ADD), "I'm new here" (I look like a foreigner wherever I am), "Sorry... instinct" (you can't blame me for a knee-jerk reaction), or "I didn't get the memo" (aka: "Why didn't you tell me?").
What are these excuses for? For my "Duh" moments, which I will refer to as my "What Was I Thinking?!" moments. Let me start with the good ol' bagel incident.

For those of you who've been patiently reading my online ramblings, I wrote about my first encounter with the bagel here: Romancing The Bagel.

As if my romance with this wanna-be-donut pastry wasn't enough humiliation (however private it was) sure enough, I had another episode where I just knew that someone behind me had said, "What the heck is she doing?"

We were at a hotel breakfast spread. I was barely awake (excuse #1). They had the average fare: cereal, oatmeal, fruits, coffee, juice, milk, doughnuts, muffins, sliced bread, and bagels. Some hotels have waffle makers and microwave ovens; this one had a contraption -- like those pizza cooking gizmos -- with a conveyor belt and a heating element over the belt so that you toast only the top portion of whatever you want to toast the top portion of… like maybe your bagel. But unlike pizza conveyors, this one doesn’t go in one end and out the other -– it goes in one end and out underneath.

In other words, you put the bagel on the conveyor, and it slowly travels into the toaster, falls through the back end, and slides forward so you can pick it up just under the belt. Easy.

This was our first time at this hotel, and the first time I saw this contraption (excuse #2). And that morning, I wanted a bagel. What I've always done with my bagel was split it open (learned to do that already), spread some cream cheese on each half, and pop the cheesed slices on the toaster oven. I get warm bagels with a slightly crusty cream cheese topping. Just the way I want it.

So, instinctively (excuse #3), I picked up a bagel, split it open, and spread some cream cheese on the slices. I looked up and about for a toaster oven, but it seemed this conveyor contraption was all they had. So I placed by cheesed bagel slices on the belt. And they started traveling into the machine.

Suddenly, it's like I woke up. Aach! Before I could take another breath, my slices rode deep into the machine, disappeared from view, and fell into the back of the toaster... cheese-side down.

I had to grab the longest pair of tongs on the table so that I could reach the bagel slices now upside down and totally stuck to the back end of the chute where the bagels slide out.

I dashed away with my warm half-bagels, nevermind that most of the cream cheese topping ended up on the floor of the toaster. I was hoping nobody noticed, but surely someone will whisper a curse when his bagel gets stuck in the chute because some idiot put a cheesed slice in the toaster.

The good news is, that was a lesson well learned. I will know what to do (or not do) when I use that conveyor toaster again.

Here's the model we got: 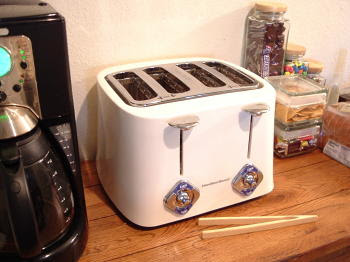 All I have to remember is to cheese my bagels -after- I toast them.
3 comments:

Email ThisBlogThis!Share to TwitterShare to FacebookShare to Pinterest
Labels: bagels, cooking, food, what was i thinking

Sometimes procrastination saves the day. Case in point: I had been considering moving to another blog server because Blogger didn’t have the “tags” capability. I felt I needed a way to sort my entries by topic since my blog has been racking up posts, but Blogger’s interface didn’t allow it. I knew I had to migrate, but I kept putting it off like an appointment for a root canal. Though I knew I’d have to do it eventually.

Just as I was cracking my knuckles ready to deal with yet another learning curve switching to Wordpress or some other blog venue, Blogger announces an upgrade version that allows “labels” for each journal entry. “Tag”... “Label”... same diff. So, I rested my knuckles and waited for the version release. They rolled it out yesterday. And I must say I’m pretty happy with the new features and ease-of-use. Labeling was a snap!

Unfortunately, this morning, the Feedburner feed managing my blog gave me (and all the feed subscribers to Learn-Something-New, obviously) a funky surprise.

Apparently, when I labeled my journal entries in Blogger (of course, I had to label all the entries, all the way back to March, or else the labeling concept wouldn’t make much sense), Feedburner got messed up. Today, it sent out a notification that Learn-Something-New has a new entry, but instead of the actual latest entry that I wrote yesterday, it broadcasted the posts I wrote back in August.

Anyway, I’m done tweaking the labels, so this post should appear in tomorrow’s Feedburner broadcast as the latest entry. Things will iron out eventually. Well, they better!

Meanwhile, I’ll stay on with Blogger… I still have to experiment on the new mess-with-your-layout feature. I wonder what exciting glitch will come my way this time around.

P.S. Thank you, Blogger, for your new features. I’m sure a lot of bloggers like me appreciate all the hard work you’ve put in. Kudos to your tech team!
No comments:

Festival of the Masters 2006

The Festival of the Masters has been an annual event at Downtown Disney for the last 31 years. I wonder why I never went out of my way to see it until last weekend. According to the brochure, the Festival “showcases art from more than 200 of the finest artists across the nation.”

Sculpture, jewelry, painting, photography, glass, and digital art are just some of the art genres featured this year. It took me two hours to just walk from one booth to the next, without even talking to the artists. An amazing collection of absolutely stunning work.

Too bad I didn’t have the time or energy to ask the artists about their chosen art, where their studios are, or how it feels to be part of a very special show like the Festival of the Masters. I would’ve learned so much from them. All I could do was snap some photos to remember the shock and awe I experienced as a spectator.

Here are my favorite booths (I apologize, I didn’t get the names of the artists. A serious oversight):

The larger versions and the rest of the photos are here: Festival of the Masters

Also, I discovered that the Festival’s Signature Art Artist, the one created the logo for this year’s event, is Arnel Platon – born in the Philippines and a migrant to the US in 1971 when he was 10. More about Arnel and his Festival Signature Art.