Those packages of pre-cut salad greens at the supermarket are pricey because you pay for the processing and the packaging. If you buy the greens in their original harvested form, at the farmer’s market or local grocery store, you will not only get the freshest veggies (next to harvesting from your own backyard) but also save some pocket money.

The challenge is how to keep the greens fresh in the refrigerator for the length of time it takes you to consume all of it. It’s not really a challenge because all you need are plastic bins, paper towels, and a propping device.

I found the ideal plastic storage bins at a home improvement store. They serve the purpose because they are long enough to fit a whole romaine head and deep enough to fit an average green lettuce head. 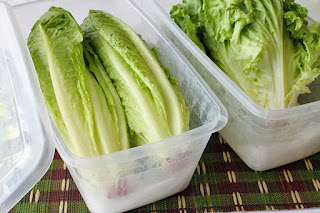 Before I store the greens, I pluck out the compromised (bruised) leaves and rinse the heads to remove whatever sand and dirt are stuck in there. If the leaves are a bit limp, I soak the whole thing in water for about half an hour to revive them. Then, a gentle shake to remove the excess water and they’re ready for the bins.

Because contact with too much moisture promotes leaf decay, and the bottom of the bin is where the excess water gathers, I address that concern two ways: I put a double layer of paper towels to absorb the excess moisture in the bin, and I install a propping device over the paper towels to hold the greens away from the wet towels. For my romaine and greenleaf lettuce, I used a plastic packaging tray. 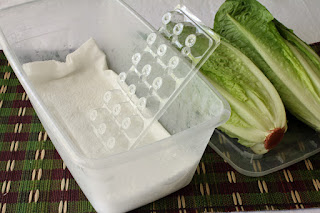 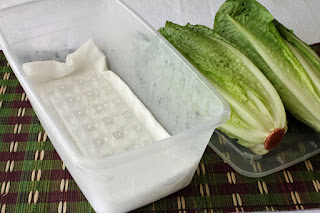 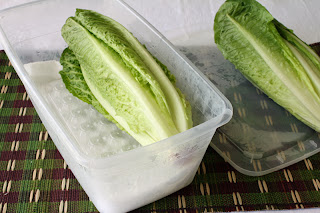 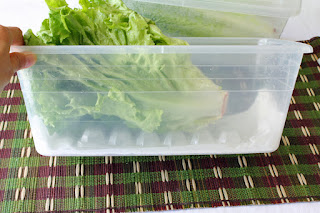 That plastic tray was originally the packaging tray of quail eggs that we bought at an oriental store. It was just what I had on hand; I could’ve used a stack of plastic spoons or a few sauce containers. I actually used several water bottle caps for my iceberg lettuce bin (I’m the Recycle-Repurpose Queen!). 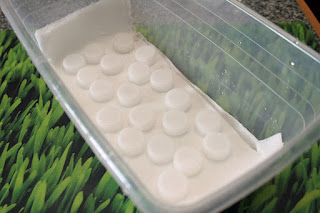 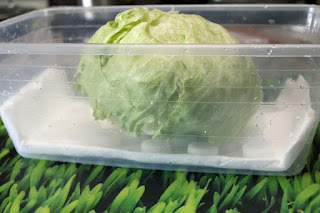 The point is to slightly lift the greens from the bottom of the container to allow air circulation and minimal contact with a wet surface.

The bins are not air-tight (veggies need to breathe too) but they seal well enough to keep the greens from drying out in the fridge. Keeping them in their own containers also ensures they don’t get poisoned by the ethylene gas from certain fruits we also keep in the fridge. 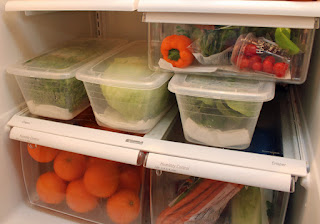 But here’s my biggest reminder: make sure your refrigerator temperature is set no higher than 40 degrees F (4.4 degrees C); the wrong temperature will hasten spoilage.

Another tip: make sure the bottoms of the lettuce heads are facing the back of the fridge. Reason: it’s colder near the back wall of the fridge; leaf tips could freeze.

If you're anything like me, you toss your used flatware in the sink, then gather all of them in the dishwasher waiting for the appliance to be full enough to run a wash. Then after about a year, you notice that your once-shiny stainless flatware are all cloudy and cruddy. You try to remove the crud by hand-washing the spoons and forks with a sponge and dish detergent but the shine never comes back. 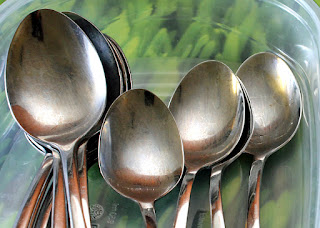 If you're anything like me, you try "The Eraser" because it can clean everything!

Then you hear yourself scream, "Whoa! Check this out!" 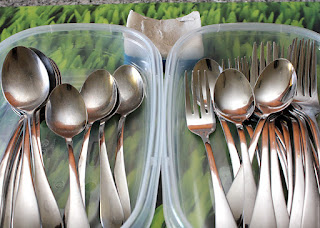 Wet the pad, slide it over the flatware surface just a few times, and watch the spoons and forks become shiny and new again! Rinse with clean water and towel dry. Revive several sets of stainful stainless flatware in just a few minutes.


I keep thinking about how we could've been more helpful. We were at a red light at an intersection near Seaworld. The guy driving the car next to us, apparently a tourist, rolled down his window and asked, "How do we get to Downtown Disney?"

After thinking quickly because the light was about to change, Mike said, "Go straight, take the ramp to I-4 West."

The guy repeated the instructions then the light turned green. Mike said to me as we drove away, "Well, he'll figure out that he has to go into the 67 exit, and find his way again."

Now I'm thinking, there were other ways to reply to the guy's question:

2. Say, "Punch 'Downtown Disney' on your GPS and follow the voice prompts."

6. Resist the urge to say, "It's complicated" and straight-face fib, "We're not from around here. Sorry."

7. Raise an eyebrow, look at the traffic light, stare back at him, and say, "Seriously?"

On second thought, Mike's instructions couldn't have been more helpful. If the guy went up the ramp to I-4 West, he would've eventually seen all the huge signs, one of which is at the nearest exit that says "Downtown Disney".