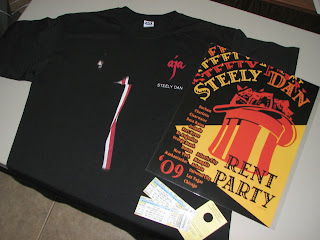 P.S.: M told a coworker that we saw Steely Dan in concert. She said, "Who's he?"
No comments:

Conquer the Fat-Loss Code is nothing short of a complete strategy to lose fat, raise metabolism, shed unwanted pounds, and remain fit for life. Wendy Chant has presented a book that not only explains the science behind the body’s reactions to food and exercise, but also details how to take advantage of these natural tendencies.

Chant’s book is a quick read because she explains the fat-loss code in simple, readily understandable terms. She also outlines all the principles involved in optimizing fat-loss (like the meal plan cycles) in straightforward bulleted paragraphs and in-a-nutshell “Conquer the Code” boxes for quick comprehension and reference. Testimonials to the success of the Fat-Loss Code (inserted in the book as “What the Code Crackers Are Saying”) are short stories that add to the credibility of the method.

Chant’s book is also a long-term guide because it has a complete 8-week planner that lists daily food suggestions, weight training and cardio schedules, and a feedback log complete with the day’s affirmation. The book not only explains the fat-loss code, it also provides the tools you need to apply the code to your particular situation. Chant even fine-tunes the program to differentiate plans for men and women, and those aiming to lose less (or more) than 30 pounds.

Of course, a plan is only as good as its Plan B. So, Chant also includes tips and tactics for special days like weekends, travel, and holidays, plus a special section on what to do if you fall off the wagon. And it goes without saying that the chapter on “Quick Tips for Ultimate Success” merits a permanent bookmark.

The last section of the book could be the most precious gift from Wendy Chant: it features her own recipes for breakfast, shakes, soups, salads, vegetables, entrées, and desserts. And to round out her comprehensive book, she adds an appendix of the Beginner’s Home Workout and several pages of references and scientific basis for her fat-loss code.

Anyone who has tried any kind of diet or regimen for losing fat (and maybe did not achieve the desired results) deserves to try Wendy Chant’s method. The science is sound, the code is simple, and this book is the key.
2 comments:

Book Review: "Made to Stick" by Chip Heath and Dan Heath

The book answers one question: What makes an idea stick to our minds? The question is profound because it asks why some ideas are better remembered than others, why some methods of communication are more effective, and why a message should be specifically packaged to achieve the intended impact. The answer involves six principles spelled SUCCES: simple, unexpected, concrete, credible, emotional, story.

What’s brilliant about “Made to Stick” is: authors Chip and Dan Heath use the answer to the question to make the answer stick to our minds. Not only do they explain how the six principles are used to make an idea stick, they also apply these principles in making their message—the book—be a sticky idea that stays in our consciousness.

The six chapters of “Made to Stick” focus on the six principles of stickiness. Each chapter uses some, if not all, of the SUCCES principles to deliver the chapter’s topic. The language is light and straightforward (because sticky ideas must be simple and memorable, like proverbs). The presentation is captivating, making you pay attention and want more. The numerous references are concrete and credible; in fact we are already familiar with many of them (like Jared, the Subway guy, the Chicken Soup series, and the Mother Theresa Effect). And with one story after another, of how regular people used these principles to make an impact, Chip and Dan Heath seal the imprint of their message in our heads.

I have never read a book that skillfully and successfully applies the principles it is trying to teach, until now. With the additional “Sticky Advice” chapters (for managers and teachers), the Easy Reference Guide, and the hundreds of fascinating reference notes, I can say “Made to Stick” will be stuck to my fingers for a while.
No comments: 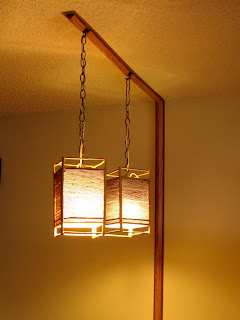 Most of my home projects are born out of necessity –- necessity for convenience, necessity for comfort. After we built the breakfast counter, I noticed that whenever I sat there, I seemed to crave for... more light. I needed to see what I was eating, and the recessed lighting on the ceiling was too far and too weak. I needed task lighting... pendant lights over the breakfast counter. Need... must... have...

To keep in tune with the house’s Japanese-y, Oriental-ese theme, do I want to use those Japanese paper lanterns from Ikea? Do I want to spend money when I can make my own lamps and post the how-to on eHow as an article and get paid for it? The answer was a no-brainer. So, I looked around the house for materials I could use...

Read about the whole project (with photos!) at my Multiply site:
"The Hanging Lamps Project"

Read my tutorial (with photos!) at eHow:
"How to Make a Japanese Hanging Lamp"
No comments:

Book Review: Put Your Money Where Your Heart Is by Natalie Pace

Everyone wants to be rich; which is why countless books have been written, suggesting ways to build wealth, by as many experts on the matter. Natalie Pace’s “Put Your Money Where Your Heart Is: Investment Strategies for Lifetime Wealth” may be just one of them, but I appreciated her book because she shared her own experiences and spoke in simple terms to readers like me, amateur investors.

Pace’s approach gives a layman’s view of the forest as well as the trees. She laid out the basic principles of investing, the fundamental guidelines in designing and maintaining a sound investment portfolio, and the various wealth-handling challenges one has to deal with. She stresses that it’s not just about getting rich, but also about staying rich.

What makes “Put Your Money Where Your Heart Is” a compelling read is how Pace reveals her own successes through real-world examples. She shows how she handled her investments over the years and describes which companies she studied, recommended, and built her own wealth on. She shares her personal investment strategies openly and clearly; and she nutshells every major lesson with three important takeaway tips.

“Put Your Money Where Your Heart Is” is a good how-to book in investing that even a newbie can quickly understand and immediately apply. Regardless of whether the overall economic situation is in flux, Pace’s chapters like “The Magic of Stock Report Cards”, “Lessons from Enron”, and “The Top Eleven Investing Mistakes” remain universally pertinent. In fact, the book details how to invest wisely so that wealth becomes recession-proof.

Natalie Pace’s book details practical answers to crucial questions like “How do I choose a broker?”, “How do I buy low and sell high?”, and “How do I diversify my nest egg?” For me, though, the best takeaway of all is her set of tips that describes “The Foolproof Get Rich and Stay Rich Plan.” After reading this book, I feel that I’m psyched to learn more about enjoying a lifetime of wealth.
1 comment: