In case you're not familiar with my Flickr photo site, username: MyRuby, I'd like to share a set of interesting shots that I took the last time I visited Seaworld.

There's a preserve at Seaworld where Caribbean Flamingos congregate. The other times I visited the park, the birds were loud and cackling at each other -- doing their bird thing. This time, they were all taking a nap.

I'm not sure what it is that inspires them to nap at the same time, at this particular time, but there they were, their long necks all curled up, their heads tucked under a wing, and, yes, standing on one leg. All of them! 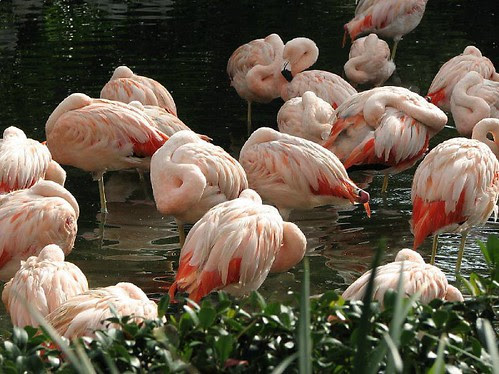 So, while I was pretending to be a photographer there, getting bored at all the ball of feathers I was waiting to move around for some semblance of a flamingo photo shoot, two of them woke up and walked toward each other. They seemed to have awoken too early, and decided to confront each other. 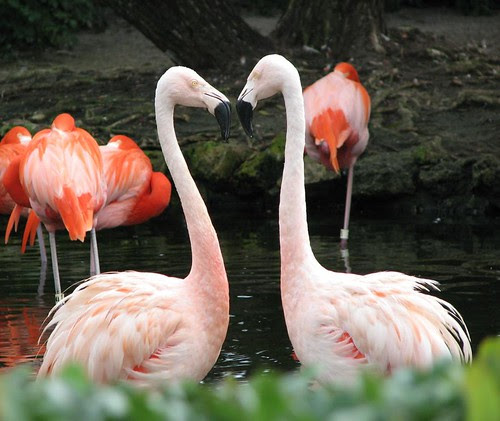 "Of course not! Maybe YOU woke me up!"

Then a third one woke up and approached the other two. Their heads came together, bobbed up and down, their rubbery necks almost twisting around one another. They looked like they were planning something. For a few seconds there, I imagined them hatching a plan (get it, "hatching"?! LOL!). 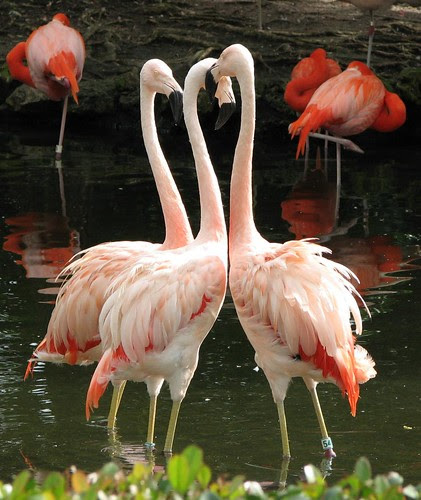 Well, they didn't really do anything like that. After a few more minutes of bobbing heads and nudging each other, probably some macho territorial ritual, they walked away and slowly faded into the pond-ful of balls of feathers. At least I got a few neat-o photos of these exotic iconic birds.

Next time I visit Seaworld, I'll camp out next to the penguins.

nakapunta din ako sa seaworld one time and saw these colorful flamingos, too bad i didnt have good camera with me. I like your photos specially the 2 love birds....in the pic they dont look like they are arguing like you describe (who woke up who).

Thanks for coming by, dolphinstate! They're really fascinating, these birds. Especially when they're all together like that.