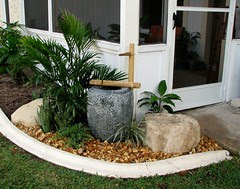 You are so creative and always active. I love what you did near the door. I am not an outdoor person at all.

Nice to see you are still moving in the creative world :)

re: Check out my blog!