What’s a Lord without a cape? This particular elven lord wears a royal-red one what flows sleekly with every stride. I found a bright maroon microsuede fabric at JoAnn’s on sale. Three yards was more than enough for my son’s height. The pattern was easy, just a straight cut with a slit for both arms.

My challenge was how to make it sit on the shoulders squarely and still lie flat behind the neck no matter how tightly the armor vest is worn. My solution was a garter/elastic strip along the back of the neck, and snaps to attach the cape to the shoulders of the vest.

I had to hand-sew the gather on each shoulder and use hot glue to attach the vinyl strip that would have half of the snap. I attached the other half of the snap onto the shoulder of the vest.

My mistake was I didn’t look to see if I had a brown elastic band, which I had. It would’ve been less obvious than the white one I used (and I was too tired to re-do it). 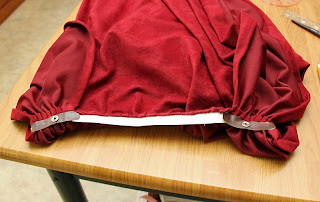 Here’s a photo of the snap solution. 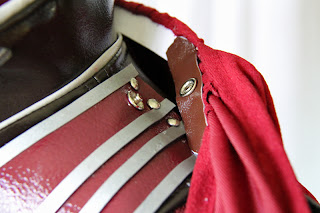 I made a couple of medallions using polymer clay. I pressed the raw clay on a round metal pendant that had swirlies. After baking, I painted it with silver, then bronze acrylic. I superglued the brooch pin hardware to the underside so that I could attach it to the cape. Later on, I made the medallions shiny with Mod Podge. 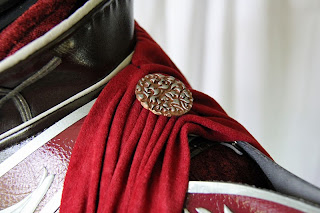 And this is the finished cape on the dress form. It works! 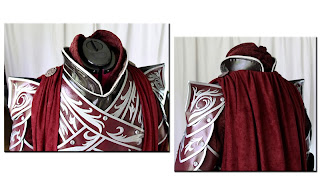 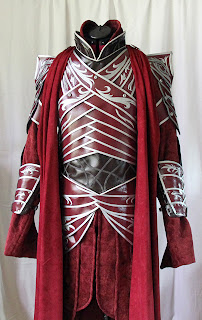